A 6 MONTH MENTORING PROGRAM FOR COACHES WHO ARE READY TO LEVEL-UP & GET SERIOUS ABOUT THE GROWTH OF THEIR COACHING COMPANY.

FOR 6 MONTHS I’LL BE WORKING EXCLUSIVELY WITH A HAND-PICKED GROUP OF COACHES TO TEACH THEM EVERYTHING I KNOW ABOUT BECOMING A SUCCESSFUL HIGH-TICKET COACH.

There came a time when I looked around me and saw that other coaches who were doing similar work to me were charging a LOT more than I was…AND they had a lot more clients.

At first I figured they must KNOW more than I did or that they got better results for their clients or they had more experience than me and that this is why they were able to charge more than I was (does this resonate??).

None of it was true and in fact, for the most part I’d been doing this a LOT longer than most and my client results were often much better and that they did NOT know more than I did.

How do I know this?

Well I hired a few of these coaches to see what it was that they had that I didn’t and guess what?

The answer was NOTHING.

Nothing except for the fact they had made a DECISION to become high-ticket coaches and start charging more AND in doing so were attracting a much better calibre of client.

For a long time I held off making that same decision because I believed that if I had trouble signing clients at a lower rate…how the hell was I going to get anyone to pay me THAT much?

At some point I realised I had nothing to lose because the clients I did have were sucking the life out of me AND they were hard to come by.

So I re-invented myself as a high-ticket coach and boy did I kick myself for not doing it sooner because my life became a whole different ballgame.

Working with LESS clients and earning a lot more.

Getting far better results for my clients because I was attracting a better quality client AND because I had more time to give them AND I never felt any resentment for doing the work because I knew I was being paid well for my efforts.

The moment I owned my place at the high-ticket table I got noticed and opportunities began pouring in because suddenly I was taken a whole lot more seriously.

It was ridiculous really because I was the SAME COACH…..DOING the SAME WORK.

It’s just that I had decided to charge more and make sure I was worth every penny.

There have been many things I would do differently if I had a do-over but the main one is that I should have done it sooner, MUCH sooner.

Back then there was no PATHWAY for becoming a high-ticket coach and while I could see coaches doing it I simply didn’t know HOW.

Maybe you’re in the same boat?

Maybe you’re ready to become a high-ticket coach but you don’t know HOW to become one.

If you ARE ready then I have the how. 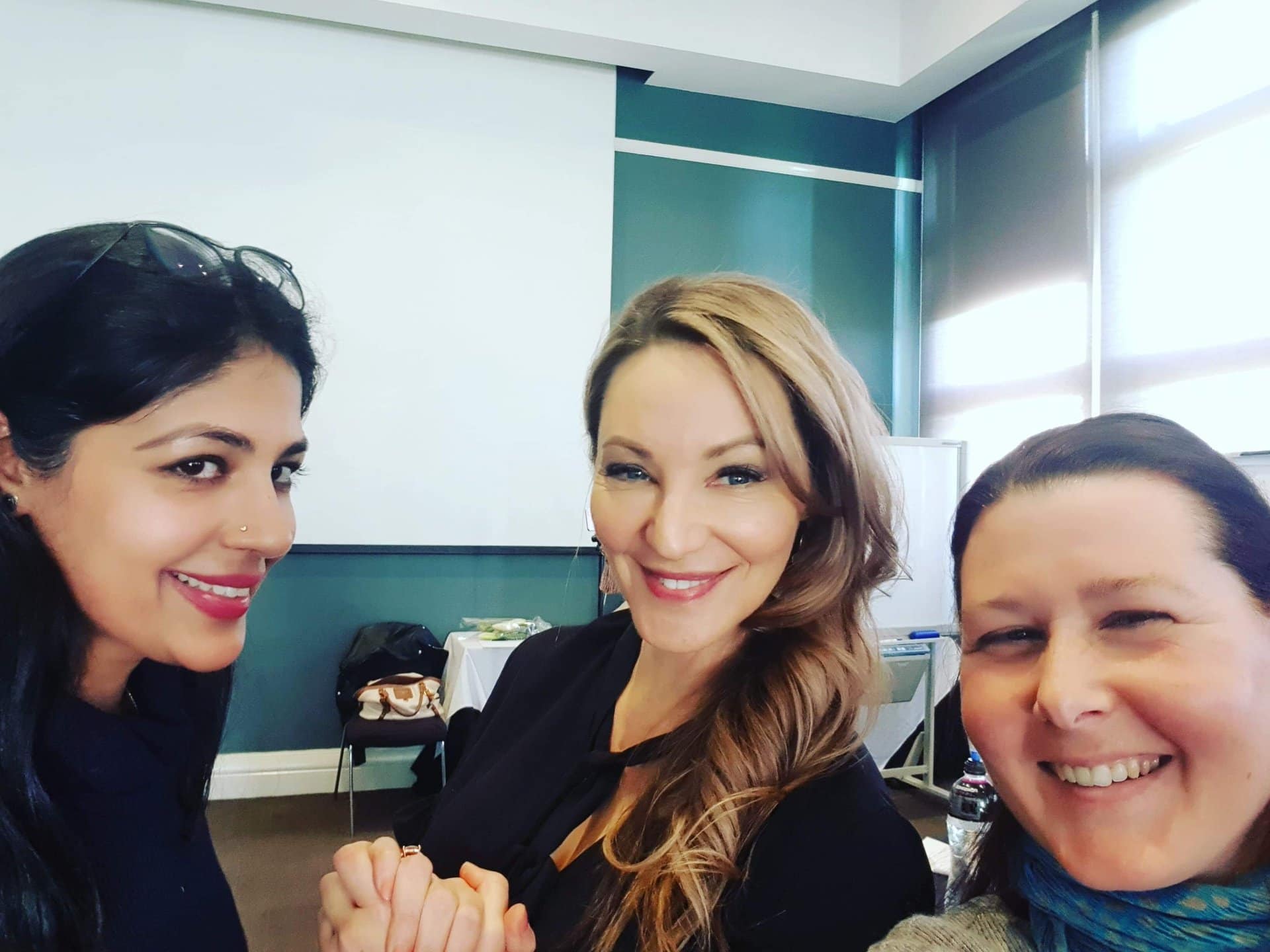 I’ve been a coach since 1991 and I began coaching and mentoring coaches when I became “officially” qualified as a coach in 1999 but over the past few years I’ve been working exclusively with coaches who wish to help them to position themselves as high-ticket coaches.

I know my stuff.

I highly recommend Michelle! Gosh what have I accomplished in this program?

I have created facebook ads and funnels that convert, something that I have wanted to do for a long while now.  I knew the strategy but it was the ‘doing’ and pushing myself through my beliefs and staying the course that was the hardest part.

Michelle is a fantastic strategist but she is also a great mindset coach who will challenge your beliefs and help you push past them.

Being a mindset coach myself I truly take my hat off for her. She is the master!

I believe everyone needs a coach. Lol we are all coaches but boy do we need someone to keep us accountable! We are all human at the end of the day and Michelle totally lives what she teaches.  So tap into her mindset and attitude! That is gold!

I sold a high ticket program that more than covered the cost of Michelle’s program.

I now have a working funnel I can replicate and use for selling any program.

But most important of all, I know so much more about myself.

I realised the reason I failed in the past in getting any traction is because of ‘shiny object syndrome’ but Michelle held me firmly to our strategy and this is how I got there in the end.

Being an entrepreneur requires you to become super laser-focused.

Refuse to even entertain any other strategy or method until you maximise and scale the strategy that is working for YOU.

There are millions of ways things can work but if you have something that works for you, please stick with it and scale it, this is aa lesson I had to learn repeatedly and thanks to Michelle it stuck because she really pushed me here.

Life as an entrepreneur is supposed to get easier and easier. Don’t think it’s about working harder and harder. This is something I teach to my clients but now I truly understand it.

Hands down the best thing I EVER did for myself and for my business was start working with Michelle!

I came into Michelle’s program as a complete start up coach, I had no clients, no niche and had no idea how to run a coaching business!

6 months later and here are some of the things I’ve accomplished:

I identified my niche as a Food Relationship Coach.

I have created and branded a high ticket coaching program specific to my clients needs that I am 100% confident in.

I now have the ability to coach my clients with complete confidence.

I developed a lead magnet and funnel I know my potential clients love.

I know how to run Facebook ads and generate leads.

I now regularly have Discovery Calls booked when before this wasn’t happening at all.

I also have mastered the art of crafting killer sales pages for my programs.

I really found my voice online and now feel 100% confident in the message I share with the world.

The other important area of which I gained huge value working with Michelle was implementing everything required to build an online thriving business from all the technical components to social media, lead generation- you name it!

As far as Michelle is concerned implementation is everything and it was her encouragement and support (along with some butt kicking) that helped me to follow through on the strategies we had set out to implement.

Having a coach  like Michelle to motivate and inspire me everyday has been the best investment in my business and I’m extremely thankful I connected with Michelle to make this happen.

If you ARE done with playing small and you’re ready to take YOUR place at the high-ticket table read on….

This program is a perfect blend of private coaching, a supportive and high-vibe group environment, practical strategy, mindset shifts all designed to elevate you from where you’re playing right now and have you stepping fully into the role of a high-ticket coach who get’s results for their clients and BUILDS A REPUTATION for those results.

If you think others are charging more because they know more you’d be wrong.

So much of this is to do with your mindset AND the way you position yourself from here on in. Watch the video below to discover more. 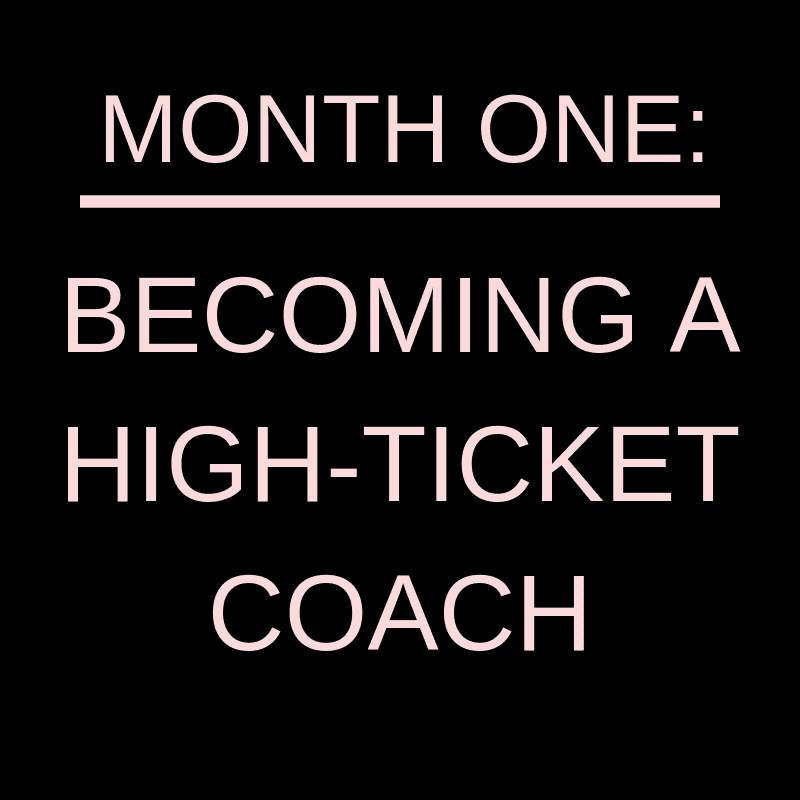 Making the mental shift to high-ticket coach & claiming your place in the high-ticket world. 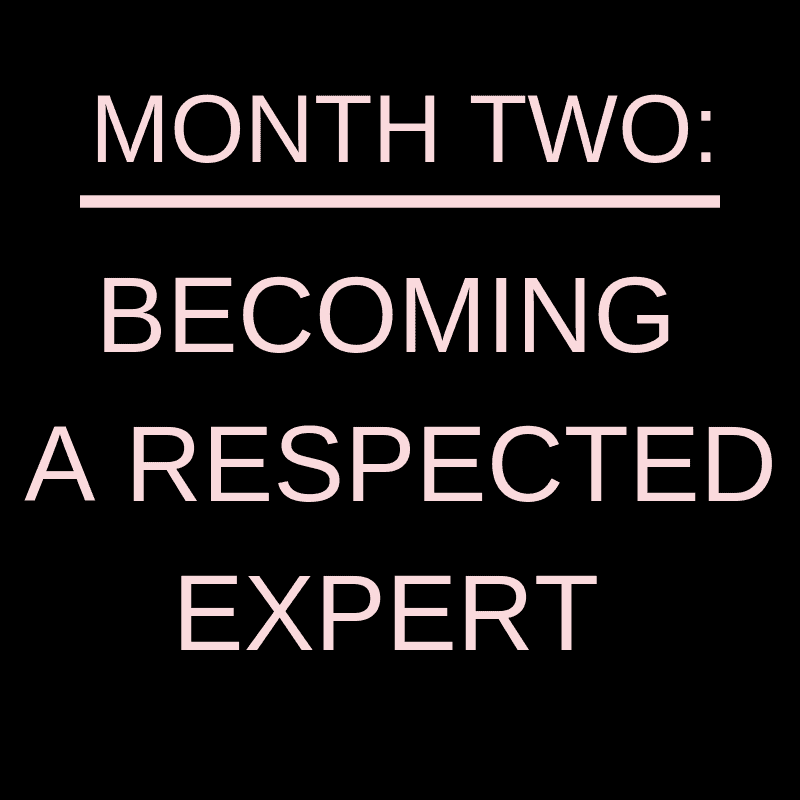 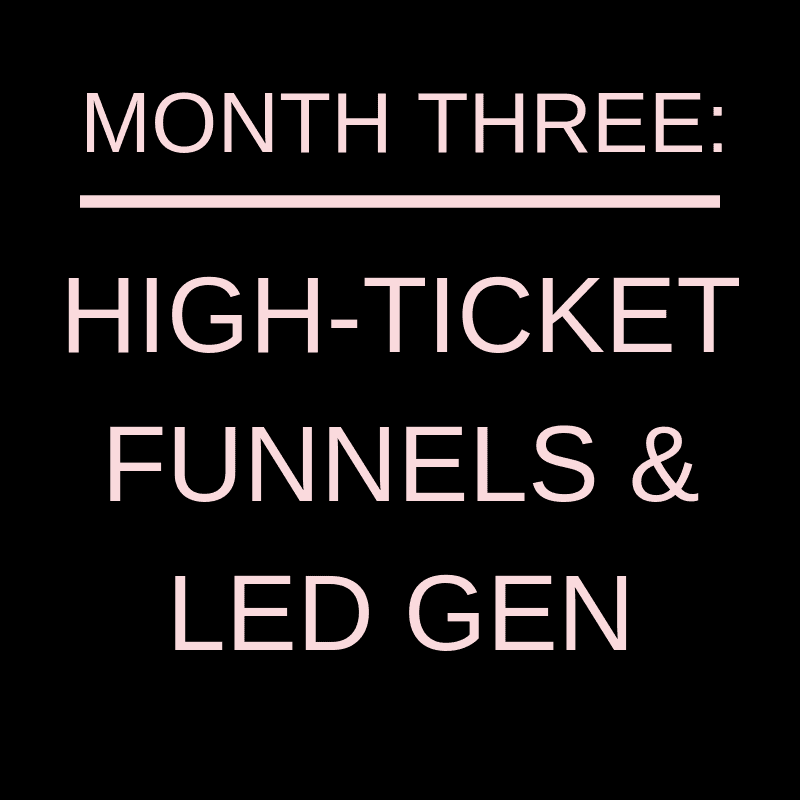 Hiring the team that will support you. 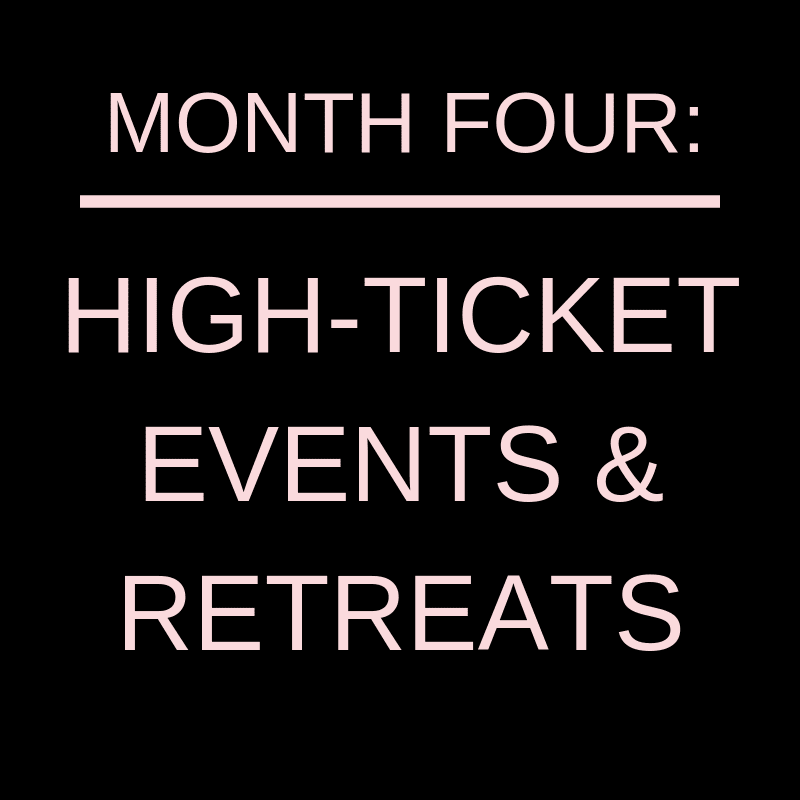 Ready to hit the stage and speak?

We’ll be crafting your speaking strategy.

Want to run a high-ticket retreat?

Well be packaging your high-ticket retreat. 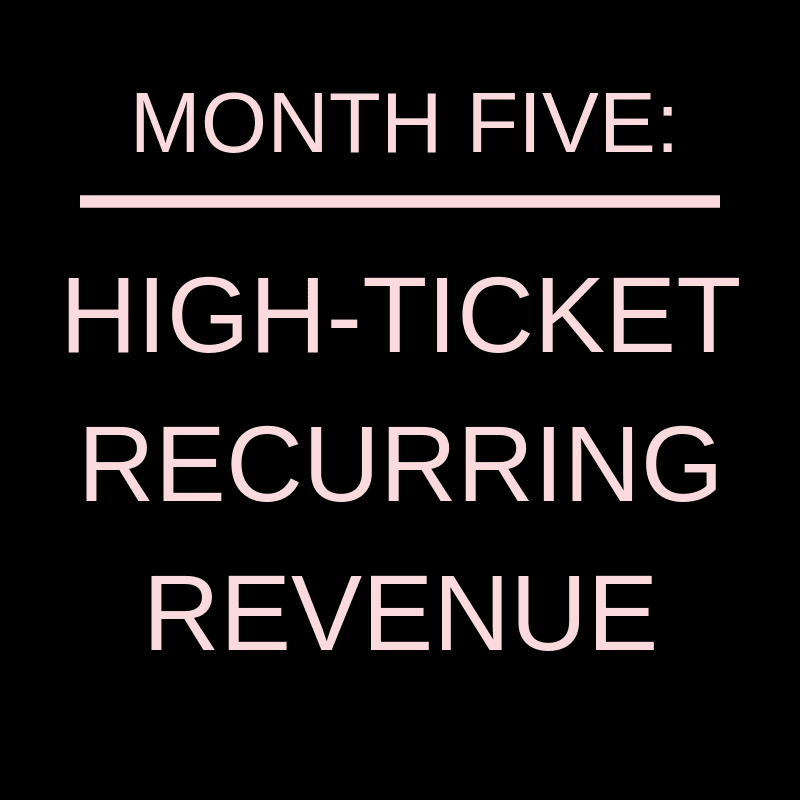 This month we will craft your recurring revenue stream offer. 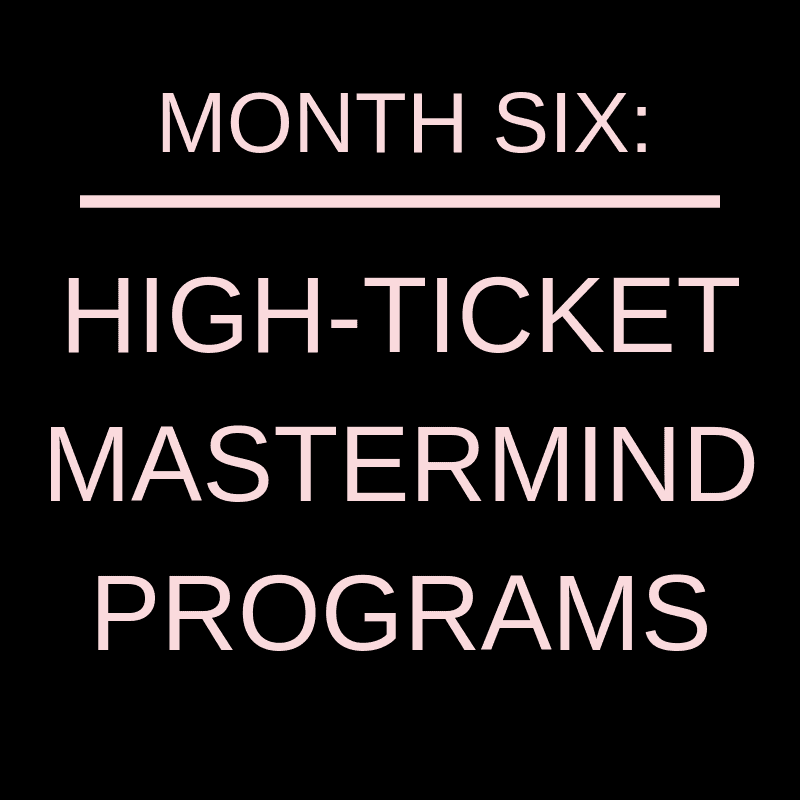 High-ticket recurring revenue streams are another MUST as a high-ticket coach.

In the final month we’ll be crafting your high-ticket mastermind program.

Thread throughout this entire program is the stuff that makes ALL the difference….the “intangible”.

The Mindset Stuff – The Energy Stuff (nothing too woo woo or crazy I promise) & The Wisdom Stuff that only I can bring having been in this game for DECADES people!!

Trust me when I say that these things alone make this program priceless.

We work both privately and as a group.

Each participant has one private mentoring session every month.

Each participant has access to me in between coaching sessions, usually on a daily basis Monday through Friday.

HOW YOU KNOW YOU’LL GET THE RESULT YOU’RE AFTER

Your success is my success: I’m all about delivering the outcome I promise and doing everything I can to make sure you get the result you’re after and the way I’m able to do this in a group mentoring program is to keep the numbers small so I can be sure to give each coach what they need to keep the pace of the program.

The addition of private mentoring sessions ensures you have the exact strategy and support YOU specifically need to get the result you want.

Note That Tax Is Already Included

I want you to ask yourself…..”Can I sell at least ONE High-Ticket Coaching Package with Michelle’s help?”

If the answer is YES then please hit the application form below.

ARE YOU 100% READY TO BECOME A HIGH-TICKET COACH?

PLEASE COMPLETE THE APPLICATION FORM BELOW

& I’LL BE IN TOUCH SOON TO SCHEDULE A CALL WITH ME.